If I was ever to show my palm to an astrologer, he would declare that the travel rekha is quite strong in my destiny. That is, if there is such a line in palm which indicates the amount of journey one accomplishes in one’s life.

It all started when I joined an Engineering college that was 45-50 kms away from my house and I had to travel daily 4 hours to and fro. The drivers of the private buses mistook the national highways to be their own Formula One race circuits and dangerously overtook other buses, shouting the choicest of abuses at each other. When we reached college, my friend and I used to visit the temple at the entrance to thank the Lords above for allowing us to live yet another glorious day.

After graduation I worked as lecturer and the college that I was employed in was situated in the outskirts, in the lap of nature (literally translated to cheap real estate prices), which meant that, again I had to travel for considerable time. Currently, as an IT employee, I spend 2-3 hours of my day travelling. So it’s apt to say that at least one-fourth of my precious lifetime was spent in buses. 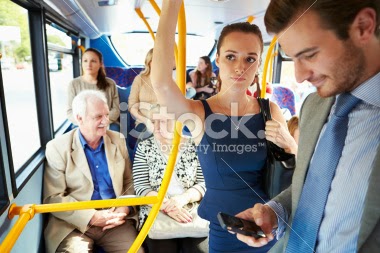 I do enjoy the journey because I have my music and my books but the problem arises when the buses are crowded.  During my college days the private buses had blend of all varieties of smell. If there was the college dude with his strong Axe perfume, giving him tough competition was the fisherwomen with their fresh bounty in the basket under the seat. If we had that year’s Rose Queen girl with her expensive Charlie fragrance wafting in the bus, we had the local drunkard reeking of the Toddy that was consumed last night and probably in the morning too. Then of course we had the college geek who was too busy studying, to notice that he had worn the same stinky socks for the past one week.

The buses were so crowded that many of my friends travelled while standing on the foot board or hanging behind the bus. Squashed in between the midst of human bodies I had difficult time breathing in some fresh air. There were many thoughtless, stinking men and women, who in their rush wouldn’t have taken a hot bath or applied perfume to combat their overpowering BO. And there I was, my short 5’2 height becoming a liability and the other people towering over me, I had to control myself from gagging.

All I wanted to do is shout “What’s that smell Boss?” But good sense prevailed and I pushed my way to the footboard. Travelling dangerously but breathing in the clean, fresh air was a better option I felt. So this way I suffered for the 4 years of my Engineering and now that I travel in Volvo buses with the AC on, the situation has slightly improved.

But there are days when I am happily sitting in my favorite seat enjoying my music, when a gigantic aunty with a humongous bottom and BO comes and plops herself in my adjacent seat. By the time she adjusts herself in her seat, half of my body is flattened on the window next to me. I am very particular about my quota of the seat or my portion of the bed and I don’t like anyone invading my space. I try to be pushy too in such situations, but invariably give up in the end, thinking of being squashed next to the sweaty underarms of the gigantic aunty.

Ah, I prefer being half out of the window anytime compared to the other alternative.