Review-"Shades of Life-Sublime Joy is in Living" By Vasundhara Ramanujan & Mohammad Akmal, MD 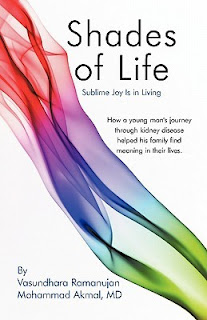 Everyone has a deep, dark fear lurking in the corner of their mind. Although subconsciously they are aware of their phobia, they wouldn’t want to face their fear. I have one such fear. The fear of losing people who are close to me; my family and my friends. I am an introvert by nature, so I have very few  friends, but I treasure them the most. That is why I could relate to the author, Vasundhara Ramanujan and her poignant story in her book, “Shades of Life-Sublime Joy is in Living”.

When Mrs. Vasundhara’s fifteen year old son Aditya complained of a persistent headache that wouldn’t go away even after 3 days, she visited her family physician. They were shocked beyond belief when they learnt that a common ailment like headache could be caused by a life-threatening condition called kidney failure. What followed is the heart wrenching story of how Vasundhara and her family helped Aditya to fight his disease and keep his hopes up.

When medicines failed to save Aditya’s kidney, his family decided to go for a kidney transplant. Vasundhara came forward to donate her kidney to her son, but unfortunately she was diagnosed with breast cancer. Her sheer determination and grit to help her son and gift him a new lease of life helped her to fight her cancer. After she completely recovered, her kidney was transplanted and Aditya was free again. Free from the worries of dialysis, free to live his life the way he wants, free to pursue the career of his choice. And he made the best of his life. But after a decade of his first transplant, his kidney failed again. Vasundhara floundered a second time to help her son survive this dreaded disease. Aditya’s life was saved by his elder brother, Dhananjay who decided to donate his kidney to his kid brother. But as a mother, can Vasundhara allow this to happen. Can she ask her elder son to make a sacrifice that may affect his future life? Vasundhara is at a crossroad. She wishes with all her heart that her younger son be saved but her wish may cost her elder son’s happiness and his brilliant future.

At the very beginning of the book, Vasundhara states that the intention of writing this book is not to entertain but to educate. To spread awareness of this disease and she succeeds in her endeavor. She enlightens the reader about the importance of kidney, the functions it performs in our body, what are the early signs that can be used to detect kidney failure and how to take care of patients once the transplant has been performed. And the best thing is, she explains everything in layman’s terms which makes it easier for a person with a non-medical background to understand renal failure.

At 160 pages, this book is a short read but gives abundant information about kidney failure and shows how in adversity a family needs to stand together and focus in sailing through difficult times. Truly inspiring!

P.S: Did you know that after the heart and brain, the kidneys are probably the third most important organ, on whose function a person’s survival rests? I dint but after reading I book, I do.

On a lighter note though, I would like to add that, just because you have two kidneys in your body and you know that only one is sufficient to perform the required function, you can’t abuse them.:)  Have a healthy life.

This review is a part of the Book Reviews Program at BlogAdda.com. Participate now to get free books!