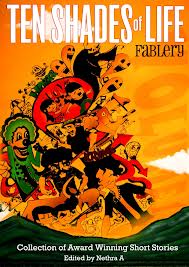 I think most bloggers at some point of time during their exhilarating blogging journey would have desired to publish their work.

So it was a total delight to read a book that came into being because of the collective effort of fellow bloggers who have already carved a niche for themselves in the blogosphere.

I picked ‘Ten Shades of Life’ (Edited by Nethra A) with lots of expectations and fortunately, this book was a delight to read. It offers readers ten stories from ten different genres and most of the stories were excellent and were a riveting read.

Here’s a short review on each story in the book.

1. Where did you go? By Deepa Duraisamy-
A small baby boy is kidnapped and the police force has a hard time trying to track down the kidnappers. Since this is common occurrence in India in recent times, the plot of the story feels plausible and real.

Suspense/Thriller being my favorite genre, this story did not disappoint me as it had all the elements of a good thriller story. The story has been well paced and the narrative is engaging and keeps the reader engrossed.

2. A Nootropic Egress by Karthik L-

A lad of 17 years has an extra-terrestrial experience but what he encounters is not exactly how he had expected it to be.

Ok, I’m not too fond of stories under Sci-fi genre, but this story I have to admit, is excellent. I loved the author’s ingenuity in creating characters and events in the story that captivates the reader’s interest right till the end of the story. The story is out-of-this-world (pun intended).

A hired hit man finds himself at the wrong end of a gun when he attempts to salvage his past by saving the life of a small girl.

An action/adventure story has to be fact paced and has to keep the reader on the edge of his seat. And this story had all that in addition to being sleek and classy. I loved the way the story was narrated-it had an almost Hollywood panache attached to it. A thumbs-up to this story!

A man about to be retired finds himself to be the butt of a joke in his office, but what happens when the tables are turned and the prankster invariably falls a prey to his own prank.

A story belonging to humor genre, this book failed to impress me. For me it fell short in the humor department, although I felt bad about the poor old Mr. V or something like that.

5. Weekend in The Country by Bruce Memblatt-
When Richard, in hope of a relaxing weekend, took off with his friend, Paul, to the country side, he never supposed that his life would never be the same again.

I love horror genre, the Stephen King kind of stories. This story although heavily short on giving the reader the heebie-jeebies, maintained a level of interest. Although the story kind of felt dull in the beginning, the climax was nerve-biting one. However, the story was highly predictable.

6. Red and Gold by Monika Pant-

The age old collision of a Muslim girl in love with a Hindu boy forms the backdrop of the story.

A story belonging to the romance genre set in the 18th century in Awadh, it had a melancholic feeling to it, like the couple belonging to two different religions were doomed right from the beginning. The narrative is good, but somehow the characters failed to create a vivid impression on me.

The secret of Sonar Killa has been safeguarded by the Oswal family for years and when the Rajput family is threatened by the Mughals, can the old secret help to rescue the royal family.

History has never been my favorite subject, even in school, but this story strikes a chord. This is primarily due to the rich detailing of the life and the people in the Rajputana era by the author. Never knew that history could be so mesmerizing. Now, only if those boring lessons taught in school in History subject could be so interesting.

Set in the future, in the year 2054, when humans are ruled primarily by machines called humanoids, humans struggle to break free and caught in the midst of an imminent war is a woman in search of her mother.

This story had me really puzzled because I couldn’t exactly categorize it into the philosophical genre. It kind of felt as sci-fi as well because it was set in the future with a peek into how in the year 2054, humans will be mere slaves to machines.

But this story worked for me, because it had an emotional touch to it. It also built my curiosity in imagining how life would be after 4 decades.  One of the good stories in the book.

9. A good day to die by Rahul Biswas-

An honest hard-working man working in Mumbai Fire Brigade is in danger when his own devious plan back-fires.

I really had never heard about a genre called Occupational, but this story was impressive in its narration and the plotline. I liked the ending of the story which had a kind of dramatic twist that I wasn’t really expecting.

10. The Incarnadines by Cheyenne Mitchell-

A teenage girl caught between her parent, who never wanted to marry each other and who cannot live together, realizes the truth of her parents and helps her mother to be free again, but at what cost?

The story falling under the Fantasy/Mythology genre disappointed me a bit because it fell short of the magical aura that a fantasy story should possess. The language used to narrate the story is lucid but somehow it didn’t have that X-factor which could have taken the story to another dimension altogether.

Out of the ten stories, I would rate three stories the best (although other stories were also well-written and made an interesting read)- Harry’s Bluff by Roshan Radhakrishnan, A Nootropic Egress by Karthik L and Where did you go? By Deepa Duraisamy.
I would rate the book a 4/5.