He came home from office and was greeted by the fresh aroma of baked cookies. His wife made the best cookies in the world. She was lounged on the sofa reading a book. As soon as she saw him, she came to him and hugged him warmly. He was married for the past 3 years but every day when he came back home he was welcomed by his wife with a warm hug and a hot cup of tea. Forget the cookies; he had the best wife in the world.

The hug was accompanied by a peck on his cheek. But the kiss was followed by a yelp of pain by his wife.

She: “Ouch that hurts. Why do you keep your evening stubble? I can’t even kiss you when you come home? Would you be ok if I grew thick, coarse hair on my arms and every time you touch me you would feel as if you had kept your hands on a plateful of nails, huh?”

Now that comment drew a snigger from him much to the disdain of his wife. He moved his hands on his jaws and felt his hairs bristle. But he loved his stubble. It gave him a dark, brooding and a sexy look. Kind of like George Clooney.

He: “Hey, I thought women loved the stubble on men. I heard that it can be a turn-on”.

He wiggled his eyebrows just so that she gets the complete gist of his statement.

She: “I love your stubble dear, but not when it hurts me. So you better shave if you ever want to be kissed by me”. She wiggled her eyebrows right back at him.

He sighed and went to their bedroom. He looked at the mirror and contemplated his look for a full minute. He looked rugged and sexy and he knew girls just loved this look on men. The pretty hot chick who never even gave him a look in the office turned for a second check at him today.

He decided his wife must be insecure and jealous, since he looked so sexy in his new look.

Just then Chintu, the fruit of his loins stirred from his sleep. He went to Chintu to snuggle next to him. He loved to sleep next to the warm body of Chintu and judging by his wife’s mood, the chances are that he would be spending the night cuddled next to Chintu. 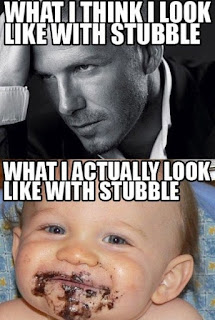 He went and kissed Chintu noisily.

He: “Beta, where is my kissy-wissy. Don’t you want to kiss papa”.

Chintu kissed him and immediately cried, “Papa, chubtha hain (it hurts). No kissy-wissy from me till you remove your daadi (beard)”.

That did it. He went to the bathroom to get his shaving kit. He dint want to sleep alone on the couch in the night. Moreover, George Clooney had millions of girls swooning and swaying over him. He had only his wife.

The last thought that he had in his mind as his stubble came off was, he had to think of something else to get the attention of the pretty hot chick in office. Damn!!!

This post is a part of the 'Shave or Crave' movement in association with BlogAdda.com
Posted by Prasanna Rao at 5:23 PM